Summing up this summer - just a personal take on it

Okay, before this summer becomes just a distant memory I'll note down some of my semi-relevant experiences and impressions.

After a busy first year on the Ceramics MA at UCLan I decided to have a bit of a break from pottery and give my family a chance to reacquaint themselves with me. We spent a week in the South-West of France visiting a friend and another two weeks in Germany catching up with family and friends.

As said, I tried to switch off a bit from ceramics but it doesn't mean that my appetite for culture (and a few pots) was non-existent. Here are some of the things that I came across during that time. Who knows whether they'll gain some relevance in my work somehow...

In Lodéve we came across this lovely restaurant, Le Soleil Bleu. Not only do they serve good food but they exhibit and sell good quality ceramics and some prints as well. Definitely worth a visit. This is a good example that a restaurant can be classy yet informal outlet for good quality ceramics that go beyond just being domestic wares. 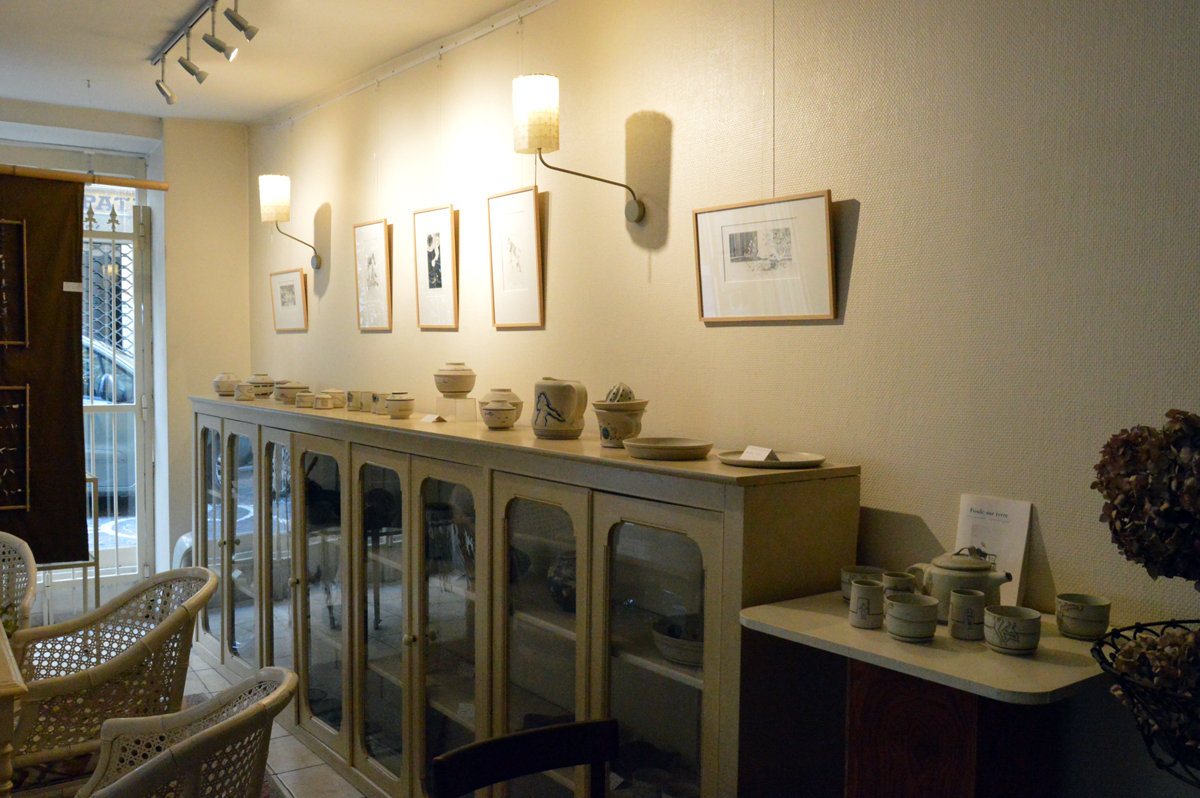 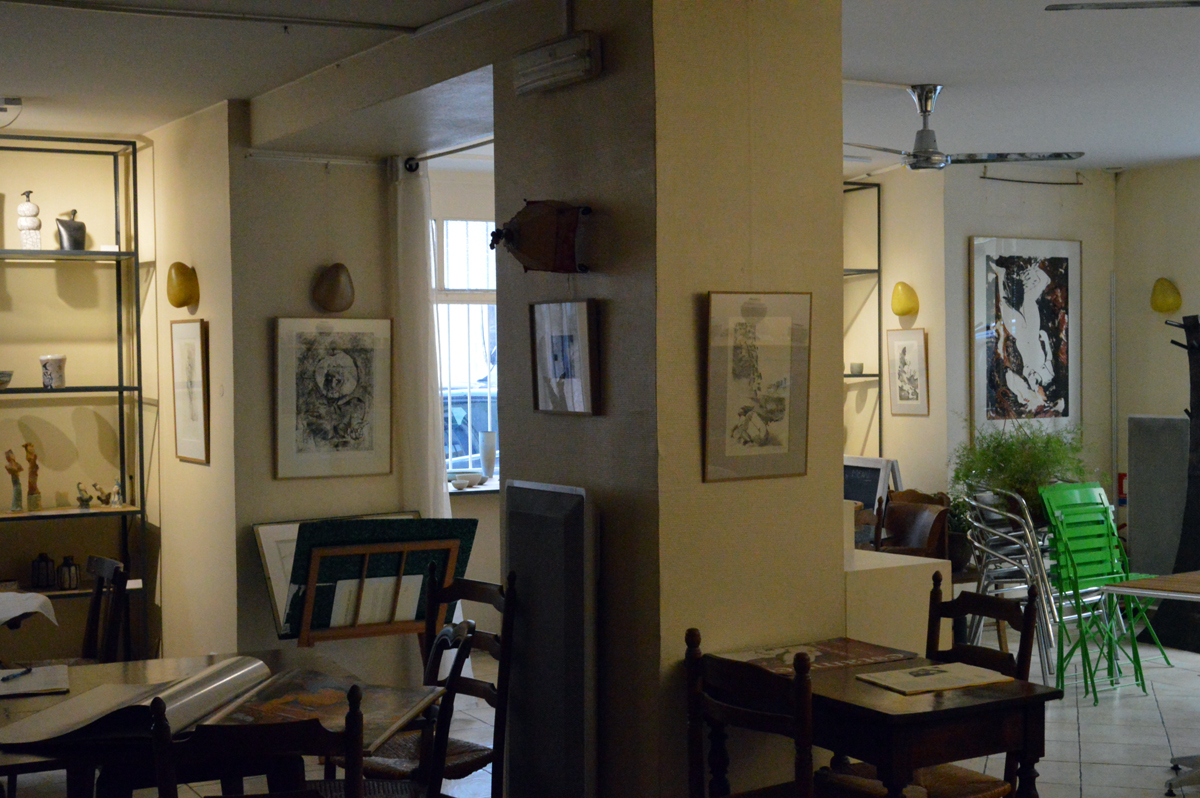 I didn't want to interrupt the other patrons during their dinner to take better photos so here are just a few examples of what was on show.

We also went on to see an interesting collection of over 100 prints shown in the Lodéve Museum. There were so many fascinating prints to see that I will just pick out three:

I particularly like the print of Dürer who has such clear lines. It was great to see two prints by Piranesi. His Imaginary Prisons have fascinated me since I saw them in a book as a child. They depict mysterious internal architectural spaces that one could so easily get lost in.

Another gem is this print by Goya, whose work also has great fascination for me. His print is such a mad study of bovine vitality and rendered in such beautiful greys.

White walking around Béziers we came across this little pottery studio/shop. It was strange to see what sort of wares they were displaying, i.e. spring chickens, cacti and Christmas trees. I guess that covers all possible home-made present ideas that might entice customers to either come in and buy them or, more likely, to sign up for a short course themselves. It didn't make me want to go in though.

Beside enjoying the good company I was in, the lovely food and wine and brilliant landscape and local architecture I was also taking in some patterns:

​It is always a joy to be returning to fabulous Hamburg, the city I grew up in and spent twenty years of my life. Having left Hamburg many years ago when I moved to England it now feels both very familiar and unfamiliar. Not only has the city change over time but my personal perception of it has altered as well. It is fun to see familiar things in new ways.

Then again some landmarks are totally new such as the new concert hall, the Elbphilharmonie. It is the newest architectural landmark on the river Elbe, which was finished late in 2016 under a cloud of lots of controversy. We did the tourist thing and took the escalators up to the viewing deck overlooking what is left of Hamburg harbour.

It is certainly imposing (even monumental) and I am glad that the top is such a mirrored surface reflecting the sky.

I always loved the river Elbe and the whole maritime feel it has given to Hamburg. Glad it is still a working harbour and has an active shipping industry.

This time we went to see the Art and Alphabet exhibition, which was housed in the modern extension of the museum.

This show focused on how different international artist use the different alphabets across a range of different media to examine how they are part of a cultural identity.

I didn't think that my daughter would be interested in this exhibition but she seemed to relate a lot to what was shown but physically responding to the images especially to Alphabet, 2005 by Polish artist Paulina Olowska, a performance alphabet presented here as still photographs.

But also the large wallpaintings of German artist Friederike Feldman got a physical response that went beyond the meaning of the words writing on the walls.

I liked in particular the work shown by Hamburg-based artist Harald Stoffers. These large sheets of paper are covered with black black felt-tip pen marks and are formally at least written letters, often addressed to Frau Stoffers. However, they go beyond written letters in the sense of means of written communication because the way in which the alphabet is used, the way the letters are laid out. The letters of the alphabet are distorted and overlapping and their elongated shapes create a visual rhythm when paired with the wobbly lines reminiscent of the lines on sheet music. To me this is very close the pattern making without formalistic repetition

Another artist using the alphabet and words in black on white paper is Janice Kerbel, a Canadian artist based in London. Her's however is much less about pattern but about the cross over of the meaning of a word and the process of reading it which is determined by the way it is presented by her.

The black & white work by Irish artist Katie Holten, who now lives in New York, appealed to me because of its apparent visual simplicity. She uses nature to create her own alphabets and alphabet systems in a way to see whether there is an "unconscious alphabet" to be discovered. In a way, she is reinventing some sort of pictogram system which I find quite often can be the foundation of many patterns found throughout the world.

Well, I left my family to recover while I had a look around one other room in the Kunsthalle where I saw some interesting large sculptures.

In the Modernist section there were five interesting large sculptures of which three at least are based on the human form.

Even though I can appreciate the skill and artistic value of works by Giacometti they don't appeal to me personally. I think this is purely down to me liking sculptures of volume and curves.

I have noticed that often when looking at sculptures from the mid 20th century I am drawn to the work by Henry Moore. However, the one here called Upright External/Internal Form from 1951is definitely not my favourite. I find it too contrived and not natural enough. Sorry.

So, why do I like this spiky beast. I forgot to note down by whom this piece is. But I enjoy the negative and positive spaces and the difference in scales between the elements. This one works for me.

Even though this piece by Karl Hurting most closely resembling the human figure it has the simplest shaped which shows the most abstraction. This works really well with its beautiful green patina. Super.

Star in a Dream by Hans Arp is a second for me among these five. It probably most resembles the sort of shape I am aiming for in my sculptural ceramics and I have been thinking of introducing holes to my figures. However, looking at this Arp piece I think it would be better to keep it simple and stay away from holes - at least for now.

During our visit to the Museum of Art and Crafts, Hamburg (see two separate blog entries) we also stumbled through the Keith Haring Poster exhibition. This was an unforeseen benefit as I like his work. It is so graphic, immediate, full of energy and direct.

We watched the 30 minute documentary film accompanying this exhibition which was really interesting. Whereas I was aware about his AIDS activism there were other aspects of his work that were new to me. For example, that he never did any preparatory sketches but just drew/painted his work directly in situ. He had a real vision and assuredness of what he wanted to depict. He was also great at self promotion and not unlike Andy Warhole, whom he became friends with, knew how to turn his art into a commercial success. Thus the existence of so many posters which perfectly combine the means of spreading messages and offering affordable art to the masses.

Enough of museums for now - here are some more impressions picked up during my stay in Hamburg:

What a great summer we had full of very varied cultural impressions but now it's time to return back home and get back to pottery.

Going ahead: Potfest in the Park

Potfest in the Park - still rescheduled