This was my first time attending the ICF which is a biannual event held in the university grounds in Aberystwyth. It caters from Friday until late Sunday everything pottery related from workshops, symposiums, sales, exhibitions, talks, demonstrations, kiln firings, awards, trade stands and lots of gossip, talk and bonding over pottery-related issues.

I hitched a lift with Adele and Katie, both 2nd year MA students, to the venue. I guess that was my luck as on the way I could join them in the visit to Meri Wells' studio. It was great that the majority of the current MA students managed to attend this fab event and that most of us managed to get rooms in the same building in university halls. Sorry, for the rather late and noisy first night in our kitchen. It was fun though!

People with a firm UCLan connection were well represented here at ICF. Besides our current lot of ceramic MA students and other ex-students visiting the festival we were also represented other ways:

Lanty Ball, another of last year's graduates and recipient of the last Potclays Emerging Makers Award, gave a speech early Sunday morning along with this year's candidates. Well done for managing such a good presentation...!

Matt Wilcock, BA graduate and winner of last year's TGPT, is holding his own very eloquently on the interview panel "Life After The Great Pottery Throwdown experience" hosted by Lars Tharp, know from the Antiques Road Show.

What this means to me personally is that there are possibilities out there to get your work seen and recognised beyond the confines of a degree. That is very encouraging. You just have to go out, see the opportunities and make them happen.

One person who seems to have the knack is Dave, our course leader, who managed to get himself a last minute official role as 'student' helper working alongside kiln-firing legend Fred Olson to fire the large land-art/clay sculpture by Alexandra Engelfriet. This event spanned the whole weekend.

​I really liked the way Engelfriet uses her whole body to create her works.

Most of them are very large and site specific. She works both inside and outside. The work she makes indoors seem to me to be very about emotions and internal conflicts. Her outdoor work seems more outreaching. It is interesting how she uses clay, which comes from the earth, and sculpts it onto the landscape. In a very direct way her clay work becomes part of its surroundings. However, the firing process is totally transformative and creates a division that sets her pieces apart from the unfired earth they sit upon. There is a real tension here. It would be interesting to see how these fired pieces get 'reclaimed' by the environment they sit in by, for example, corrosion or plants. 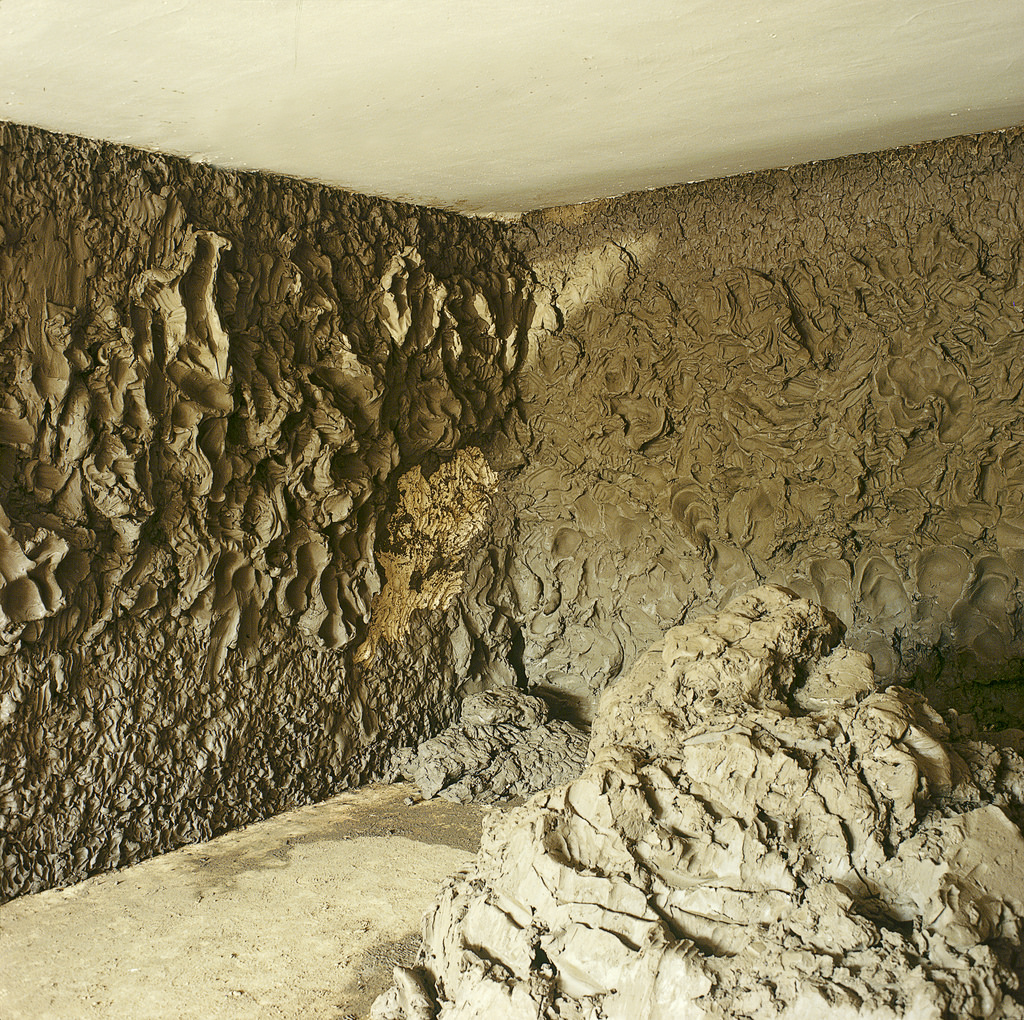 For me her large gestural work which is the exact total opposite from what I'm making is totally fascinating. I think there is a real sense of unapologetic artistry and lack of concern of what other people may think of her and her work. This is obviously not the case as it takes other people to help her and be prepared to invest time, energy and money to move and fire such large amounts of clay. Well, she got Fred Olson and Dave and many more people to involved with the kiln building and firing!

It was just a shame that we (the public) didn't get to have a real close look at the finished work as it wasn't deemed safe for us to go up the slope. So, from afar it one couldn't really appreciate its subtle beauty.

As said above, there was lots and lots to look at and take in over the weekend. Some of it will probably be forgotten over time and other impressions will linger and ferment and may inform some part of my practice in future. I cannot possibly cover everything that I saw and experienced, not to mention all the stuff that I missed out as one cannot be at more than one place at a time. However, I will try to pick out some highlights for me:

The work by Sabine Classen from Germany appealed to me because she combines both a seemingly simple form which is quite complicated at the same time in her sculptural ceramics.

She is very concerned with circular shapes and the spaces within. She also uses mathematical concept of the Möbius band to develop many of her shapes. It was interesting how uses paper templates to work out her shapes before making little marquettes, which she then scales up. The finishes of ceramics are varied by are void of any decorations which would distract from the overall shape of her pieces. The finish on her pieces vary but echo textures and materials such as stone, metal and concrete.

In a way she is the exact opposite of me. My shapes are developed very freely without any logical constraint, beside that ones dictated by the material and gravity, but my decorations are the ones where the control and precision is invested.

I really appreciated the tactile quality of her little marquette, which she was generously letting the public handle. And it was with great interest and public anticipation that the firing of one of her pieces was met during the festival.

The kiln was opened during firing to add wood and wood shavings to create a reduction atmosphere. I'm not sure how successful it was but it was an impressive spectacle

Another example of cross cultural art is Chisato Kuroki. She is Japanese but lives and works in Spain. I think I was the only one of our group who managed to go to her lecture. Kuroki only came to clay and pottery after moving to Spain and she claims that this has given her very different approach than having started pottery in Japan. My guess is that it has given her lot of freedom from a possibly prescriptive ceramic tradition that is so well established in Japanese culture. Thus, her approach and use to clay and pottery is very varied.

At one end of the spectrum she does much more traditional pots and also smaller sculptures. According to Kuroki her sculptures are an attempt at a pure expression of her feelings. She says that she has no concept when she start a piece of work. She consciously to try to keep her mind blank in order for her inspirations to influence her works immediately. In a ways she seems to be attempting a sort of stream of consciousness pottery process. Thus, she has a very emotive connection to her pieces. In some cases she included her own her into the clay to personalise them even further.

To certain this 'unplanned' approach that may be applicable to her smaller pieces but that can't be the case with her large clay sculptures such as the 'Takoivo House' (='casa de té'). Here she build an adobe-style house which was fired in situ within a kiln made out of hey bales. As part of this performative piece she performed a traditional Japanese tea ceremony to mark its completion. The firing took three days in total.

She is also does big land art such as '+588-588 Timepo Cero' in 2013. In this case the clay structures weren't fired but left to be reclaimed by rain.

However, she will remembered to visitors of this year's ICF for her paper kiln that was fired over Saturday evening. She said this was the seventh time she'd done such a large communal paper clay firing. These Fire Mandalas use only wet paper for the kiln walls. The right mixture of fuel is very important and consists of 50% charcoal to 50% coal. She wasn't too pleased with out come of the firing here at ICF as she thinks that it has overtired to pieces as it got too hot. Once mastered, the wet-paper kilns offer a potter a cheep way of building a kiln that is customised to the exact piece that is being fired. Thus the size of piece isn't limited to the size of a kiln one has access to. However, it also seems much less predictable and open to misfirings. It is much more exciting as communal activity and spectacle.

What impressed me was Kuroki's breadth of work and working practices. She is definitely not afraid of trying out new things and has a vision of her work that extends the boundaries of a studio/shop/gallery set up. There is a certain element of serious yet irreverent transgression in her work. It was good to see woman in charge of an experimental large scale kiln firing instead of one of the 'expert' men.

Going ahead: Potfest in the Park

Potfest in the Park - still rescheduled